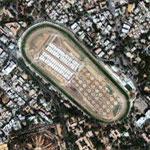 Birth of Bangalore Turf Club - One morning in December 1 1920, four stewards met at the grandstand of the Turf Club's present location in High Grounds. They were: Major R.H.O.D Paterson, Sir Leslie Miller, Major J.M Holmes and C.N Suryanarain Row. These gentlemen approved to form a race club in the city.There were to be 30 club members. The Stewards could elect an unlimited number of stand members. The admission charges for both types of memberships was Rs 20. Men were required to pay while entry was free for women.
Links: www.bangaloreraces.com
811 views