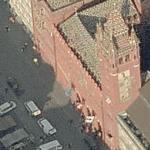 By adrbr @ 2008-02-11 18:19:09
@ 47.558243, 7.588149
Basel, Switzerland (CH)
The fine building on the Marktplatz was constructed in stages at the beginning and end of the 16th century and at the end of the 19th century. A guided tour of the Town Hall including the chambers of the Great Council and Council of Government is accompanied by an account of the architectural and political history of the city canton and an outline of its present situation.
924 views