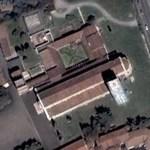 By DonMartini @ 2006-05-05 05:45:14
@ 45.44262, 10.97937
Verona, Italy (IT)
The Basilica of San Zeno Maggiore is considered one of the great achievements of Romanesque architecture. The present structure is the 3rd on this site, built from 1123-1135, over the 4th century shrine to Verona's patron saint, St Zeno. The splendid façade dominates the large square, and is flanked with a beautiful 72 meter tall bell tower, which is mentioned by Dante in Canto 18 of Purgatory in the Divine Comedy. The weathered Veronese stone gives a warm golden glow and the restrained lines of the pillars, columns, cornices and the gallery with its double windows give the façade an air of harmonious elegance. The huge Rose Window is decorated as a Wheel of Fortune. The lintels above the portal have carvings of the months of the year. Each side of the doorway is embellished with 18 bas-relief panels of biblical scenes, and the inner bronze door has panels have 48 primitive but forceful depictions from the life of St Zeno. The meaning of some of the scenes is now unknown, but the extraordinarily vivid, barbaric energy of the figures is a superb blend of traditional and Ottonian influences. The interior of the church is divided into a Lower Church, occupying about 2/3 of the structure, and the Upper Church, occupying the remainder. The walls are covered with 12th and 14th century frescos and the ceiling of the nave is a magnificent example of a shi's keel ceiling. The vaulted crypt contains the tomb of St Zeno (d.380), the first Bishop of Verona as well as the tombs of several other saints. North of the church is a pleasant cloister. The church also houses the tomb of King Pippin of Italy (777-810).
871 views