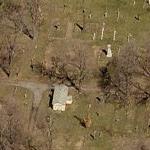 The first graves were some of the city's early settlers, moved from another graveyard that had become too full. Originally it was run by nearby St. James' Episcopal Church, but when the cemetery became too big an independent Batavia Cemetery Association was formed. It has operated the cemetery ever since.