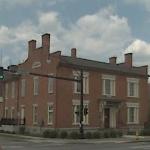 Of the two extant works in New York of Rochester architect-builder Hezekiah Eldredge, it is the less restrained, serving as both a bank and a residence for the cashier. The Batavia Club purchased the building in 1886 and used it for many years. In 1973, it was listed on the National Register of Historic Places. After the club moved out in 2000, it became the Seymour Place facility of GO ART!, the Genesee-Orleans Regional Arts Council.
Links: en.wikipedia.org
607 views