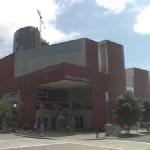 Located just across the street from Bellevue Square, the distinctive new building was designed by noted architect Steven Holl. It is seen by many residents of Bellevue as playing a role in the transformation of the downtown from series of suburban strip malls to a sophisticated city with a variety of cultural attractions.

The museum subsequently ran into financial difficulties and was forced to close to the public in 2003. After a lengthy fund raising campaign, extensive interior remodeling, a slight change in name and a new focus on crafts and design, the museum re-opened on June 18, 2005 with an exhibition of teapots.

In contrast to conventional art museums, Bellevue Arts Museum has no permanent collection. Rather, it emphasizes education and hands-on involvement through an extensive selection of classes and workshops
Links: virtualglobetrotting.com
1,059 views