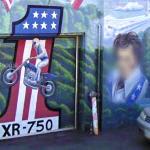 So I called up Mark DeMarco, the owner of the museum, who said that after putting the collection together 26 years ago – and then placing it in a dedicated museum in 1997 – other business interests in the Niagara Falls region have spread him and his family thin, so it’s time to sell. “We offered it first to the Knievels, but they weren’t interested,” DeMarco said. “We’ve had people interested in it call us from all over the world – Germany and Dubai – but we’re hoping that it stays here in the U.S. or Canada.” And yes, the X-2 SkyCycle remains with the museum after an attempt to sell it a few years ago. We guess this also means that if you’re in the Niagara area anytime soon, make time to see the museum while it’s still open.