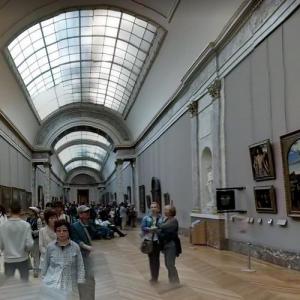 On 14 October 1750, Louis XV agreed and sanctioned a display of 96 pieces from the royal collection, mounted in the Galerie royale de peinture of the Luxembourg Palace.

On 10 August 1792, Louis XVI was imprisoned and the royal collection in the Louvre became national property.

The museum opened on 10 August 1793 with an exhibition of 537 paintings, the majority of the works being royal and confiscated church property.

The building itself closed in May 1796 due to structural deficiencies. It reopened on 14 July 1801, arranged chronologically and with new lighting and columns.

On 27 August 1939, after two days of packing, truck convoys began to leave Paris. By 28 December, the museum was cleared of most works, except those that were too heavy and "unimportant paintings [that] were left in the basement". In early 1945, after the liberation of France, art began returning to the Louvre.

The pyramid and its underground lobby were inaugurated on 15 October 1988; the pyramid was completed in 1989.
Links: en.wikipedia.org
19,814 views

Anonymous
@ 2017-11-21 06:56:23
I love Louvre museum. It has marvelous history, ☺????????, location, design and how paintings are grouped together and housed in one buildings. The ground is simply marvelous. The pyramid glass compliments the old building. The Mona Lisa room is awesome. I can I can write a thesis on it, but suffice to say that Louvre is the best in the world with its many art collections.