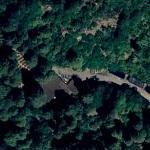 By iumelrose @ 2009-06-20 12:15:31
@ 38.463716, -122.992812
Monte Rio, California (CA), US
A 2,700 acre campground owned by the Bohemian Club. Bohemian Club is an all male club, and in July of every year they host a three week retreat of some of the most powerful men in the world at the Grove. The membership list has included every Republican U.S. president since 1923 (as well as some Democrats), many cabinet officials, directors and CEOs of large corporations including major financial institutions. Major military contractors, oil companies, banks (including the Federal Reserve), utilities (including nuclear power) and national media (broadcast and print) have high-ranking officials as club members or guests.
Links: en.wikipedia.org
19,080 views