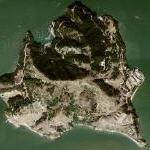 By kjfitz @ 2006-10-15 17:29:17
@ 37.860218, -122.430954
Tiburon, California (CA), US
Angel Island is an island in San Francisco Bay which offers spectacular views of the San Francisco skyline, the Marin County Headlands and Mount Tamalpais. It is a California state park, Angel Island State Park. The highest point on the island, almost exactly at its center, is Mount Livermore at 788 ft. (240 m). The island is almost entirely in Marin County, California, although, surprisingly, there is a small sliver (0.7%) at the eastern end of it which extends into the territory of San Francisco County. The United States Census Bureau reported a land area of 3.107 km² (1.2 sq mi) and a population of 57 persons as of the 2000 census.

Until about ten thousand years ago, Angel Island was connected to the mainland; it was cut off by the rise in sea levels due to the end of the ice age. From about two thousand years ago the island was a fishing and hunting site for Coast Miwok Native Americans. In 1775 the Spanish naval vessel San Carlos made the first European entry to the San Francisco Bay under the command of Juan de Ayala. Ayala anchored off Angel Island, and gave it its modern name (Isla de los Angeles); the bay where he anchored is now known as Ayala Cove.

Like much of the California coast, Angel Island was subsequently used for cattle ranching; this destroyed most of the native oak woodland and brush cover. In 1863, during the American Civil War, the U.S. Army established a camp on the island (now known as Camp Reynolds or the West Garrison), and it subsequently became an infantry garrison during the US campaigns against Native American peoples in the West. In the later nineteenth century, the army designated the entire island as "Fort McDowell" and developed further facilities there, including what is now called the East Garrison or Camp McDowell. During the Spanish-American War the island served as a discharge depot for returning troops. It continued to serve as a transit station throughout the first half of the twentieth century, with troops engaged in the First and Second World Wars embarking and returning there. During World War II, Japanese, and German POWs were also held on the island. The army abandoned the island in 1946, but returned in the 1950s when a Nike missile base was constructed; this was decommissioned as obsolete in 1962.

From 1910 to 1940, the Angel Island Immigration Station processed approximately 175,000 Asian immigrants entering into the US, serving a similar role to Ellis Island for European immigrants. Angel Island is sometimes referred to as "The Ellis Island of the West." The Chinese Exclusion Act of 1882 provided tough entry restrictions, so many immigrants waited on the island for as long as two years while they exhausted appeals. The conditions of buildings on Angel Island were poor. Many of these immigrants carved poems in Chinese on the walls of the island's buildings, poems which have been anthologized and studied by scholars. One unhappy prisoner carved in the wall, "For what reason must I sit in jail? It is only because my country is weak and my family poor." A fire burned down the administration building in 1940, and all subsequent immigration processing took place in San Francisco.

A quarantine station was opened in Ayala Cove (then known as Hospital Cove) in 1891.

In 1938, hearings concerning charges of membership in a proscribed political party against labor leader Harry Bridges were held on Angel Island before Dean James Landis of Harvard Law School. After eleven weeks of testimony that filled nearly eight thousand pages, Landis found in favor of Bridges. The decision was accepted by the labor department and Bridges was freed.

On June 11, 1962, three prisoners apparently escaped from the prison on nearby Alcatraz Island. Some of the materials used in their escape attempt later washed up on Angel Island, aiding in the investigation by the FBI.