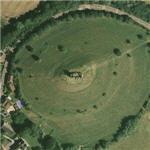 It is an ancient earthwork now owned by the National Trust, presented by Major A.C. Barrett in 1946 as a war memorial. Burrow Mump is also known as St Michael's Borough or Tutteyate. Both words Burrow and Mump mean hill.

It is a natural hill of Triassic sandstone capped by Keuper marl standing at a strategic point where the River Tone and the old course of the River Cary join the River Parrett. It probably served as a natural outwork to the defended royal island of Athelney at the end of the 9th century.

Excavations have shown evidence of a 12th century masonry building on the top of the hill. The first recorded writing mentioning this site is from William of Worcestre in about 1480 when he referred to it as Myghell-borough. A medieval church dedicated to St Michael, belonging to the Athelney Abbey, dates from at least the mid 15th century and formed a sanctuary for royalist troops in in 1642 and 1645 during the English Civil War, and a detachment of the king's army occupied it in 1685 during the course of the Monmouth Rebellion. In 1793, the attempt at total rebuilding on a smaller scale ended in failure to collect enough money, and a church for the community was built instead at the foot of the hill (Burrowbridge) in 1838. The ruined church is one of the churches dedicated to St. Michael that falls on a ley line proposed by John Michell. Other connected St. Michaels on the ley line include churches built at Othery and Glastonbury Tor.

The Mump also serves as a memorial to those in the community lost during the first and second world wars.
Links: en.wikipedia.org
727 views