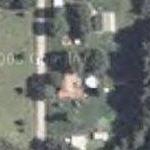 The tower still stands, but due to its very poor condition you are not permitted to climb. There is also a monument with a man, woman, and child looking skyward.
Links: www.rootsweb.com
798 views