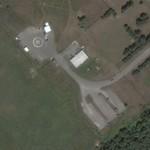 By Dania @ 2009-07-26 05:26:24
@ 45.350765, -76.04702
Carp, Canada (CA)
Emergency Government Headquarters are nuclear fallout bunkers built by the Government of Canada at the height of the Cold War during the infancy of the ICBM threat. Scattered across the country, the shelters are popularly known as "Diefenbunkers", a nickname coined by federal opposition politicians of the early 1960s, and was derived from the name of the Prime Minister of the day, John Diefenbaker, who authorized their construction.

These facilities were built, often in great secrecy, at rural locations outside major cities across Canada. Most were two-story underground bunkers (the largest one—just outside of Ottawa—had four floors) capable of withstanding a near-miss from a nuclear explosion. Each underground building had massive blast doors at the surface, as well as extensive air filters to prevent radiation infiltration. Underground storage was built for food, fuel, fresh water, and other supplies for the facility which was capable of supporting several dozen people for weeks.
Links: en.wikipedia.org
849 views