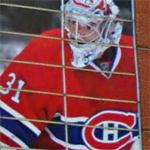 Price began his pro career with a bang. After his junior hockey career ended, he joined the AHL's (minor league) Hamilton Bulldogs and was quickly plugged into their playoff lineup. Still a teenager, he led the team to the 2007 Calder Cup championship.

He made his NHL debut with the Canadiens at the beginning of the 2007-08 season. In his sophomore season, he was named the starter in the NHL All Star Game. At the 2014 Winter Olympic Games in Sochi, he was the starting goaltender for the Canadian gold medal-winning team.
Links: en.wikipedia.org
437 views