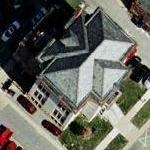 By kkeps @ 2008-11-24 14:14:03
@ 38.574982, -92.167917
Jefferson City, Missouri (MO), US
The Carnegie Public Library building was built in 1901 using funds from a grant from Andrew Carnegie. The building was designed by Jefferson City architect Frank B. Miller, who had designed many of the prominent public buildings in Jefferson City of the era. The building was slated for demolition after the new library was built next door however public outcry saved the building and it now used by the Cole County Assessors Office and a division of the State Public Defenders Office.
Links: www.waymarking.com
458 views