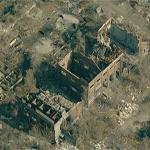 "A 40 acre complex of buildings, in operation in various capacities since the 1800s, was a site for manufacturing coke for steel production since the 1950s. It has stood abandoned since 1989. Considerable contamination has long made re-use of the riverside site prohibitive, but today plans are in the works to demolish everything on the site and construct a new industrial park.

Nature has fiercely reclaimed the site in the 15 years of its abandonment, and it has become a popular site for graffitti artists and juveniles of many stripes, as well as a fascinating destination for urban explorers. Ruined buildings and massive abandoned machinery abound, emerging from the trees like an ancient temple in a jungle."
Links: www.builtstlouis.net
905 views