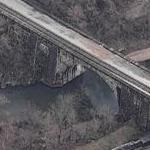 In southwest Baltimore, near the Mount Clare station stands the world's oldest railroad bridge still in use. The first bridge of the B&O, it was named for Charles Carroll of Carrollton, who laid the corner stone of the railroad. Casper Wever designed a two-arch stone bridge, the first masonry railroad bridge in the United States. An 80-foot arch spans the Gwynns Falls, while a much smaller 18-foot span crosses an old wagon road. James Lloyd supervised the construction, which was completed in 1829. To promote its new railroad the B&O sold tickets to the viaduct on New Years Day, 1830, making it the United States' first railroad destination. Regular service began May 24 of that year. In 1982 it was designated a Historic Civil Engineering Landmark. One hundred and seventy years after its opening it is still able to carry the weight of modern high-speed trains.

ChrisBrewis
@ 2009-09-08 03:22:53
Skerne Bridge in Darlington, part of the world's oldest passenger railway line, the Stockton & Darlington Railway of 1825, is still in use. It featured along with the engineer George Stephenson on a recent British banknote.
North East England also has the world's oldest rail bridge, Causey Arch, built in 1726 in the days of horse-drawn waggon ways but no longer used.

Anonymous
@ 2012-07-17 05:39:28
Oldest operational railway viaduct in the world is Bassaleg Viaduct, Newport South Wales, UK, built in 1829. It originally carried a 4ft 2ins tramway built for the Rumney railway and was converted to standard gauge of 4ft 8 1/2 ins and taken over by the Brecon & Merthyr Railway in 1863. It is still being used as a freight only line to Machen Quarry.

Anonymous
@ 2013-01-21 16:32:37
Jeeze - you've all got it wrong - the oldest railway bridge in the world still in use today was built between 1806-09 by Thomas Telford to carry the Ardrossan - Glasgow Canal before being converted to a railway, it crosses the White Cart River in Paisley, Scotland. It is called the Blackhall Viaduct, Cat A Listed.