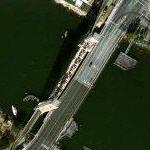 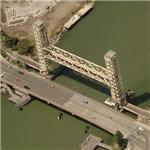 The Fruitvale Avenue Railroad Bridge (to the left of the Miller Sweeny bridge) is a vertical lift bridge for trains spanning the Oakland Estuary.

Miller-Sweeney is a single leaf bascule bridge and was built by the Army Corp of Engineers. Miller-Sweeney is Alameda's fastest bridge, after securing the bridge for an opening it takes 66 seconds to raise the bridge to a height of 79 degrees, a full opening. Power is supplied by two 75 hp electric motors. These motors operate in tandem for a normal opening. However, each motor can operate the bridge on its own if necessary. The backup emergency motor is a 5 HP motor. Using the emergency drive it takes almost 20 minutes to raise the bridge to a full height.

The Fruitvale Avenue Railroad Bridge was completed in 1951 by the United States Army Corp of Engineers.

The bridge is powered by four 19 hp motors. There are two motors in each tower. One is the main operational motor, the other is the backup motor. Each motor runs at 700 rpm.

The Railroad Bridge is the only bridge in the County that uses a Direct Current (DC) motor control system. The other bridges are all Alternating Current (AC) designs. With the DC drive system, power to the bridge can be variably applied, which gives the operator more control over the bridge. One of the drawbacks of the DC system at Fruitvale Avenue is its more complex than the other AC Designs.

Fruitvale Avenue has a unique power supply arrangement. Each tower of the bridge draws normal operating power from their side of the bridge. The South Tower draws power from the Bureau of Electricity (City of Alameda). The North Tower draws power from PG&E (Pacific Gas & Electric). Both power supplies have to be present in order for the bridge to operate under normal power. This requires a complex synchronization system in order to keep the bridge traveling properly. Without the synchronization the bridge will go out of alignment and possibly jam. The operator must carefully watch the gauges to ensure the bridge is moving correctly.

The power supply is interconnected so if one side loses power you can switch operating power from one side to the other. When using only one power supply the bridge runs on the emergency drive system under reduced speeds.