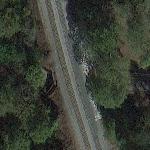 By Drudii @ 2013-01-25 11:46:44
@ 38.78979, -77.36229
Fairfax Station, Virginia (VA), US
The legend has circulated for years in several forms. A version naming a suspect and specific location was posted to a web site in the late 1990s by a "Timothy C. Forbes". This version states that in 1904, an asylum prison in Clifton, Virginia was shut down by successful petition of the growing population of residents in Fairfax County. During the transfer of inmates to a new facility, the transport carrying the inmates crashes; some prisoners escaped or were found dead. A search party finds all but one of them.


During this time, locals allegedly began to find hundreds of cleanly skinned, half-eaten carcasses of rabbits hanging from the trees in the surrounding areas. Another search of the area was ordered and the police located the remains of Marcus Wallster, left in a similar fashion to the rabbit carcasses hanging in a nearby tree or under a bridge overpass—known locally as the "Bunny Man Bridge"—along the railroad tracks at Colchester Road. Officials name the last missing inmate, Douglas J. Grifon, as their suspect and call him "the bunny man".


In this version, officials finally manage to locate Grifon but, during their attempt to apprehend him at the overpass, he nearly escapes before being hit by an oncoming train where the original transport crashed. They say after the train passed the police said that they heard laughter coming from the site. It is eventually revealed that Grifon was institutionalized for killing his family and children on Easter Sunday.


For years after the "Bunny Man's" death, in the time approaching Halloween carcasses are said to be found hanging from the overpass and surrounding areas. A figure is reportedly seen by passersby making their way through the one lane bridge tunnel.


Conley says this version is demonstrably false. Among other inconsistencies, Conley notes that "there has never been an asylum for the insane in Fairfax County", that "Lorton Prison didn't come into existence until 1910, and even then it was an arm of the District of Columbia Corrections system, not Virginia's." Court records also show neither a Grifon nor a Wallster.


Cryptozoologist Loren Coleman, via his blog Cryptomundo and in the book Weird Virginia, which has a section on the Bunny man, sees a direct association between the legend of Bunny man and that of the Goatman of nearby Maryland.
Links: en.wikipedia.org
2,607 views