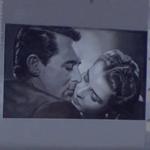 Ingrid Bergman (29 August 1915 – 29 August 1982) was a Swedish actress who starred in a variety of European and American films. She won three Academy Awards, two Emmy Awards, and the Tony Award for Best Actress. She is ranked as the fourth greatest female star of American cinema of all time by the American Film Institute. She is best remembered for her roles as Ilsa Lund in Casablanca (1942), a World War II drama co-starring Humphrey Bogart and as Alicia Huberman in Notorious (1946), an Alfred Hitchcock thriller co-starring Cary Grant.