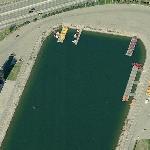 By Lamos @ 2008-03-01 06:31:23
@ 41.27537142, 1.99243069
Castelldefels, Spain (ES)
The Olympic flat water canoeing
competition was held at the Castelldefels
Olympic Canal. This competition unit is
located principally in the Castelldefels
municipal area although a small part of it
is in the Gavà municipal area. The canal is
a permanent construction and its sporting
use is limited to canoeing although it is
also an open space. The area it occupies
was previously marshland which had been
gradually covered in the sand dunes which
are characteristic of the Llobregat delta
and it was later drained for the extensive
plantation of a large number of pine trees
which are a common sight in this part of
the Barcelona Metropolitan Area.

The facility was put to the test with the
International Flat Water Regatta which
was held from 29 August to 1 September
as part of the Competitions'91
programme.

The work was financed by the Institut
Català del Sòl, a body dependent upon
the Generalitat of Catalonia, and
COOB'92.
Links: en.wikipedia.org
1,596 views