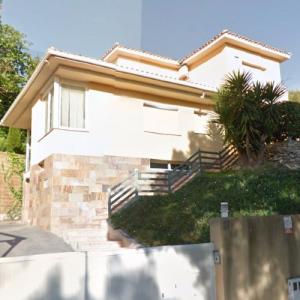 By BermudaBreeze @ 2012-06-02 11:08:42
@ 41.27854, 1.956845
Castelldefels, Spain (ES)
Lionel Messi is an Argentine football striker, currently playing for FC Barcelona. He is the captain of the Argentina national team and is widely considered the world's greatest player, becoming the first person in history to win four FIFA/Ballons d'Or, all of which he won consecutively, and the first to win three European Golden Shoe awards.

Messi's football career began at age five with local Argentine club Grandoli where he was coached by his father. After moving to Newell's Old Boys who were based in his home city Rosario, he became part of a local youth team that lost only one match in the next four years and became locally known as "The Machine of '87" which garnered interest from larger clubs, including local powerhouse River Plate. Messi and his father were able to arrange a trial for him with Catalan team FC Barcelona and he signed with the team on a paper napkin.

Due in no small part to his proficiency on the football pitch, Lionel Messi's net worth is $180 million with an annual salary of $44.68 million, affording him this residence in the Spanish coastal city of Castelldefels, close to Barcelona.
Links: en.wikipedia.org
149,896 views