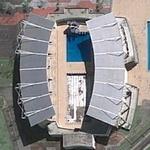 At the age of 17, she was the first Brazilian and South-American woman to participate in the Summer Olympic Games, at the 1932 Summer Olympics, in Los Angeles.