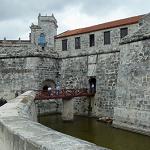 The fort was listed as a UNESCO World Heritage Site in 1982 as a part of "Old Havana and its Fortifications".
Links: www.mycubavisit.com
463 views