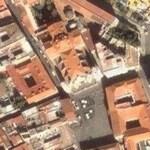 By DonMartini @ 2006-03-24 08:31:43
@ 23.141115, -82.351611
Havana, Cuba (CU)
Life for the inhabitants of the old part of the city is greatly marked by the rhythm of its squares, full with people at dawn or in the afternoon, and almost deserted during the torrid noon hours, when sunrays fall perpendicularly to the city. Cathedral Square (Plaza de la Catedral) is likewise, where the church monopolizes the entire protagonist role with its prodigious Baroque facade of the XVIII century, among lineage colonial mansions, turned into well known museums today. The Weapons Square (Plaza de Armas), in spite of its belligerent name of the past, transmits the walker a deep sensation of peace, for its abundant frond and gardens that conform an oasis amid the stone-paved streets and the superb seating of the palaces that surround it.
Links: en.wikipedia.org
762 views