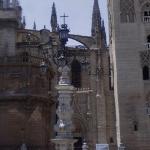 By kkeps @ 2008-10-30 06:36:03
@ 37.386104, -5.991895
Seville, Spain (ES)
It is the largest of all Roman Catholic cathedrals (Saint Peter's Basilica not being a cathedral) and also the largest Medieval Gothic religious building, in terms of both area and volume. It is 76 by 115 meters, and was built to cover the land previously occupied by the Almohad Mosque. Its central nave rises to an awesome 42 metres and even the side chapels seem tall enough to contain an ordinary church. Its main altarpiece is considered the largest in the Christian world.
Links: www.waymarking.com
602 views