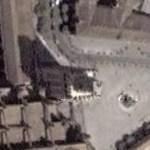 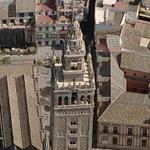 As an emblem of Seville the Giralda forms an elegant and tall silhouette next to the cathedral. Built in the 12C, the minaret (96 m) of the former mosque was crowned with three golden orbs which disappeared in the 14C during an earthquake.

The current appearance of a belfry was designed in the 16C by the Cordovan architect Hernán Ruiz, who added the bell chamber and four upper rooms each with their own balconies. A statue symbolising faith stands at the top of the tower and acts as a weathervane, whose nickname Giraldillo also gives its name to the tower.
970 views