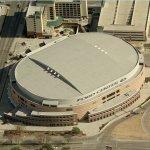 It was known as the Ford Center from 2002-10 in a sponsorship deal made with the Oklahoma Ford Dealers. The NBA team negotiated a 12-year naming rights deal with the Chesapeake Energy Corporation in the summer of 2011.
Links: en.wikipedia.org
1,933 views