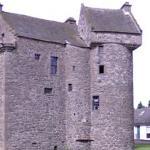 By LancelotLink @ 2010-09-01 08:37:16
@ 56.476478, -2.889359
Dundee, United Kingdom (GB)
Claypotts Castle is a medieval castle located in the suburban West Ferry area of Dundee, Scotland. The castle was originally built by John Strachan around the period of 1569 and 1588 according to dates inscribed on stones that make up parts of the castle, which make its construction longer than usual for such a small building. The land on which the castle was built was originally leased by the Strachan family from Tironensian Abbey of Lindores starting in the early sixteenth century.
Links: en.wikipedia.org
513 views