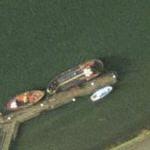 By kjfitz @ 2007-02-18 14:52:19
@ 55.60826, -4.683907
Irvine, United Kingdom (GB)
The Clyde puffer is essentially a type of small steamboat which provided a vital supply link around the west coast and Hebrides islands of Scotland, stumpy little cargo ships that have achieved almost mythical status thanks largely to the short stories Neil Munro wrote about the Vital Spark and her captain Para Handy.

"Spartan" was built in 1942 by J Hay & Sons of Kirkintilloch and launched into the Forth & Clyde canal; she was built for war service as VIC 18.

At the end of the war the VIC fleet was sold off, and Hay's the original builder bought back VIC18 and registered her as "Spartan" on the 24th September 1946, this was to join their fleet of puffers. Spartan was the third vessel of the Hays fleet to hold the name Spartan, Hay's had a tradition of naming their puffers after tribes other vessels owned by them carried the names Saxon, Celt, Briton, Trojan, Slav etc. Spartan was soon used to carry coal and general cargoes around the Firth of Clyde and as far as Mull, Iona and Islay.

Spartan ended her working career in 1980, when she was laid up at Bowling harbour.

Spartan can be seen at the Scottish Maritime Museum Irvine.
Links: www.geocities.com
1,033 views