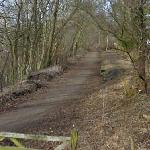 Present state: the overgrown platform and station house (detached from paltform) are extant although the house is currently unoccupied. The brick base of the signal box can still be seen at the south end of the station. Although the adjacent weigh office has been demolished the scales which were were inside the building can still be seen standing in the open air. The good loading dock to the south of the station is also extant. The start of the line to Coanwood colliery can be seen although there is no trace of the colliery itself. The tramway to the East Coanwood colliery can also be traced including a bridge under the road. At the colliery site the tip and some building remains can be seen.
Links: www.disused-stations.org.uk
544 views