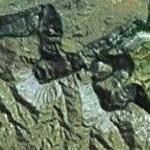 It is reportedly the deepest canyon on earth and is thought to be twice as deep as the Grand Canyon in the United States. The Colca River starts high in the Andes at Condorama Crucero Alto and changes its name to Majes, and then to Camana before reaching the Pacific Ocean.

The canyon is the habitat of the great South American condor, a species that has seen world-wide effort to preserve it.

The Spanish laid out towns along the canyon and built churches there, but the towns did not thrive and have faded out of memory. In the 1980s, the Majes Hydroelectric Project built roads and opened the area to outsiders. Access today is usually through Arequipa.

Cruz del Condor is a popular tourist stop to view the condors, which hunt in the early morning and late afternoon. At this point the canyon floor is 3960 feet (1200 meters) below the rim of the canyon.
Links: en.wikipedia.org
2,469 views

sofiagc
@ 2009-07-31 10:24:53
I was in Colca a couple of months ago and it was an unforgettable experience. I took a 3 day trek with http://www.southamericareps.com/ and it was very beautiful. We visited lots of small villages and we got to see how people really live. Amazing experience