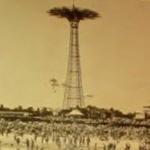 It was built for the 1939 New York World's Fair in Flushing Meadows Park, Queens, and moved to its current site, then part of the Steeplechase Park amusement park, in 1941. It is the only portion of Steeplechase Park still standing today.