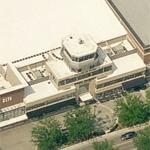 The control tower of the base is now part of a mall that is part of an extensive commercial and residential development of the former base.

The road in front of the facade of this mall that incorporates NAS Glenview's tower is named Tower Road....
4,128 views