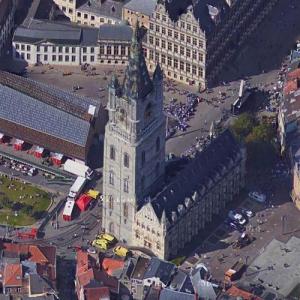 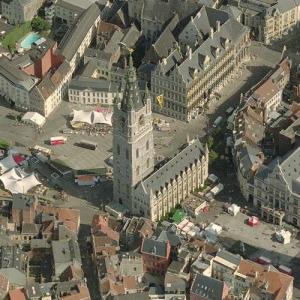 By DonMartini @ 2007-06-02 03:46:24
@ 51.054288, 3.724815
Ghent, Belgium (BE)
The 91-meter-high belfry of Ghent is one of three medieval towers that overlook the old city center of Ghent, Belgium, the other two belonging to Saint Bavo Cathedral and Saint Nicholas' Church. Through the centuries, it has served not only as a bell tower to announce the time and various warnings, but also as a fortified watchtower and town treasury.

Construction of the tower began in 1313 to the design of master mason Jan van Haelst, whose plans are still preserved in a museum. After continuing intermittently through wars, plagues and political turmoil, the work reached completion in 1380. It was near the end of this period that the gilded dragon assumed its place atop the tower. The uppermost parts of the building have been rebuilt several times, in part to accommodate the growing number of bells.

The belfry of Ghent, together with its attached buildings, belongs to the set of belfries of Belgium and France inscribed on UNESCO's World Heritage List.
Links: en.wikipedia.org
60,521 views