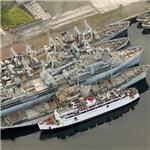 The ships are owned by US Maritime Administration (MARAD) and had become known in the US as "ghost ships" since they were anchored for years in the James River, Virginia, without anyone on board. The name became a major factor in generating media interest.
Links: www.environment-agency.gov.uk
1,857 views