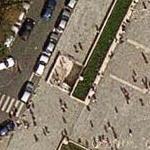 Until the mid 60's, this site was a warren of buildings dating to the middle ages. It was difficult to view the cathedral in all of its glory. Then, the buildings were torn down, during the course of which archeologists found many remains of early life.

The Archeological Crypt of the Parvis of Notre-Dame was erected by the city of Paris in order to house the (Gallo-Roman to 19th century) vestiges discovered during the excavation undertaken in 1965 by the "Direction des Antiquites historiques de I'Ile de France" (M. Fleury, director) and the "Commission du Vieux Paris". It is the largest structure of this type in the world (total length 118 m., beam length 12 m).

Imbedded in the surface of the plaza are brass strips which locate the streets and buildings that were removed.

Beneath the plaza lies the Crypt (museum). It contains remains of buildings dating back as far as pre-Roman times.
Links: www.ibiblio.org
847 views