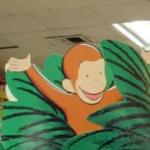 When the first story, Cecily G. and the Nine Monkeys was published in France in 1939, George was named Fifi. In the United Kingdom, George was originally called "Zozo" in 1941, apparently to avoid using the name of the then King George VI for a monkey. Books featuring the adventures of Curious George have been translated from the original French into many other languages in addition to English. The books are popular worldwide.
Links: en.wikipedia.org
441 views