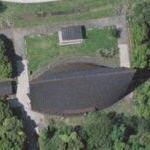 Kuboyama Aikichi, the boat's chief radioman, died a half a year later, on September 23, 1954, suffering from acute radiation syndrome. He is considered the first victim of the hydrogen bomb.