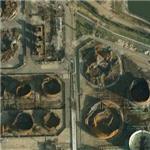 On December 11, 2005 there were a series of major explosions at the 60,000,000 imp gal (270,000,000 L) capacity Buncefield oil depot near Hemel Hempstead, Hertfordshire, England. The explosions were heard over 100 mi (160 km) away, as far as the Netherlands and France, and the resulting flames were visible for many miles around the depot. A smoke cloud covered Hemel Hempstead and other nearby towns in west Hertfordshire and Buckinghamshire. There were no fatalities, but there were around 43 injuries (two serious).
Links: en.wikipedia.org
810 views