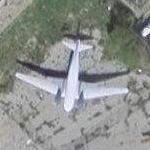 The aircraft will be mounted at the southwest corner of Airport Avenue and Donald Douglas Loop South approximately ten feet off the ground and facing the intersection in a northeasterly direction (across the street from the new Airport Park). There will be a corresponding kiosk constructed at the base of the monument to detail the history of the aircraft, the Douglas Aircraft Company and its impact on the City of Santa Monica, the Airport and history of aviation. Additionally, a monument dedication plaque will be installed memorializing those individuals, companies and organizations who participated in the project.
Links: www.santamonica.gov
1,613 views