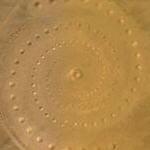 By kjfitz @ 2007-05-11 13:02:37
@ 27.380328, 33.632138
El Gouna, Egypt (EG)
The project is the brainchild of three young, intrepid Greek artists known collectively as the D.A.S.T. Art Team: sculptor Danae Stratou; her sister Alexandra, an industrial designer; and architect Stella Constandinidis. The installation, which has taken months of hard work in extreme heat and scathing winds, was scheduled to be inaugurated on November 30. But a late-autumn reminder of the desert's cruel beauty, in the form of fierce rains, pushed back the completion date to early January 1997.

"Desert Breath" is a thoughtful work of great beauty and ambition. Carved into a flat expanse of sand in El Gouna, bordering the Red Sea on the Sahara's eastern tip, it occupies 25 acres. The installation consists of two interlocking logarithmic spirals, which fan out from a common center in the same direction of rotation. One spiral is comprised of protruding cones, the other of incised cones dug into the sand.

The size of each of the 178 cones is relative to its distance from the center: The first cone, at the spiral's entrance, is 3.75-meters high and 15 meters in diameter; the subsequent cones gradually diminish in size as the viewer follows them into the center-thus creating an impression of infinite inward and outward motion. At the center is a 30-meter-wide conical vessel that is sunk into the ground and filled to the brim with water; in fact, it is an incised cone, within which is a protruding cone whose cut-off tip rests at water level, suggesting a small island, a place of birth and rebirth, generation and regeneration.

"Our goal is to create a reality that can be experienced through time and become part of one's physical memory," Danae Stratou explains. The choice of materials and forms adhered to the desert's innate rhythms. The shifting, conical sand dunes, formed by gusts of wind, led to the selection of the geometric cone as the work's predominant form. Sand, of course, became the primary material. Small mirrors placed at the tip of each cone form an optical illusion-a mirage, in the language of the desert-of water.

What won't be a mirage is the slow decomposition of the installation, which will be completely erased by the winds within six months (unless more rains get there first). The artists will meticulously record the slow fade on film and in a book of photos.
Links: www.odyssey.gr
24,642 views