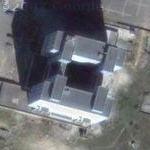 By romulusnr @ 2006-05-12 14:46:41
@ 54.709766, 20.512236
Kaliningrad, Russian Federation (RU)
The building of the so-called "House of the Soviets" begun in 1970 on the place where old castle of Königsberg stood before it was destroyed in late '60s due to idealogical reasons (it was considered to be "the symbol of Prussian militarism and fascism" by the Soviet authorities). The House of the Soviets (Дом Советов) was planned to become the center of administration of Oblast Kaliningrad and city Kaliningrad itself, but works stopped in late '80 due to an economical crisis. Currently, plans exist to complete the House of the Soviets and use it for a business centre.