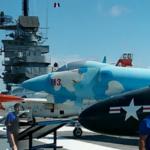 By kjfitz @ 2013-08-20 20:30:31
@ 27.815638, -97.389004
Corpus Christi, Texas (TX), US
The Douglas A-4 Skyhawk is a carrier-capable attack aircraft developed for the United States Navy and United States Marine Corps. The delta winged, single-engined Skyhawk was designed and produced by Douglas Aircraft Company, and later by McDonnell Douglas. It was originally designated the A4D under the U.S. Navy's pre-1962 designation system.

The Skyhawk is a light-weight aircraft with a maximum takeoff weight of 24,500 pounds (11,100 kg) and has a top speed of more than 600 miles per hour (970 km/h). The aircraft's five hardpoints support a variety of missiles, bombs and other munitions and was capable of delivering nuclear weapons using a low altitude bombing system and a "loft" delivery technique. The A-4 was originally powered by the Wright J65 turbojet engine; from the A-4E onwards, the Pratt & Whitney J52 was used.
Links: en.wikipedia.org
442 views