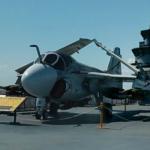 By kjfitz @ 2013-08-20 20:37:42
@ 27.814173, -97.388518
Corpus Christi, Texas (TX), US
The Grumman A-6 Intruder was an American, twin jet-engine, mid-wing all-weather attack aircraft built by Grumman Aerospace. In service with the U.S. Navy and U.S. Marine Corps between 1963 and 1997, the Intruder was designed as an all-weather medium attack aircraft to replace the piston-engined Douglas A-1 Skyraider. As the A-6E was slated for retirement, its precision strike mission was taken over by the Grumman F-14 Tomcat equipped with LANTIRN pod. From the A-6, a specialized electronic warfare derivative, the EA-6 was developed.

The definitive attack version of the Intruder with vastly upgraded navigation and attack systems, introduced in 1970 and first deployed on 9 December 1971. The earlier separate search and track (fire control) radars of the A-6A/B/C were replaced by a single Norden AN/APQ-148 multi-mode radar, and onboard computers with a more sophisticated (and generally more reliable) IC based system, as opposed to the A-6A's DIANE discrete transistor-based technology.
Links: en.wikipedia.org
391 views