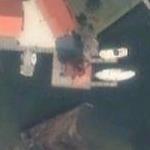 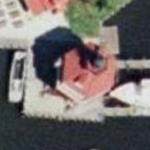 Drum Point Lighthouse at original locationBecause the lighthouse was located 1/16 of a mile off-shore and in shallow water, the keeper was able to have his family living with him.

The lighthouse was decommissioned in 1962. It was moved to the Calvert Marine Museum in March of 1975. It has been restored to its' original appearance, due in part to the help of the daughter of the last keeper. It has been furnished with period antiques also.
Links: www.cheslights.org
743 views