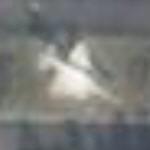 By kjfitz @ 2009-01-31 12:46:50
@ 38.290774, -76.42527
Patuxent River NAS, Maryland (MD), US
The Douglas A-4 Skyhawk is a carrier-capable ground-attack aircraft designed for the United States Navy and U.S. Marine Corps. The delta winged "Skyhawk", powered by a single turbojet was designed and produced by Douglas Aircraft Company (later McDonnell Douglas). The "Skyhawk" was originally designated the A4D under the US Navy's pre-1962 designation system.

The A-4 Skyhawk was introduced to a training role in the two-seat TA-4J configuration replacing the TF-9J Cougar as the advanced jet trainer The TA-4J served as the advanced jet trainer in white and orange markings for decades until being replaced by the T-45 Goshawk. Additional TA-4J Skyhawks were assigned to Instrument Training RAGs at all the Navy "master jet bases" under RCVW-12 and RCVW-4. The Instrument RAGs initially provided jet transition training for Naval Aviators during the time period when Naval Aviation still had a great number of propeller-driven aircraft and also provided annual instrument training and check rides for Naval Aviators. The assigned TA-4J models were installed with collapsible hoods so the aviator under training had to demonstrate instrument flying skills without any outside reference. These units were VF-126 at NAS Miramar, VA-127 (later VFA-127) at NAS Lemoore, VF-43 at NAS Oceana and VA-45 (later VF-45) at NAS Key West.

The last US Navy Skyhawks, TA-4J models belonging to the composite squadron VC-8, remained in military use for target-towing, and as adversary aircraft, for combat training at the Naval Air Station Roosevelt Roads. These were officially retired on 3 May 2003.
Links: en.wikipedia.org
444 views