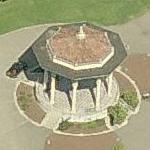 According to history files, the Oakland Municipal Band is the second oldest municipal band in California, and one of the oldest in the country. During its peak years, the band performed up to 17 times in a season.

The structure was substantially weakened by the 1989 earthquake. Funds from Federal Emergency Management Agency and the Measure I bond covered the cost of steel rods inserted into the columns, and a lift for disabled access.

"While the bandstand was being restored, the band members would perform alongside it," Woodell recalled. "Now that the work has been completed, the musicians can use it once more."
Links: www.oaklandnet.com
6,259 views