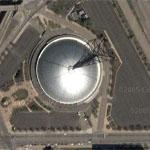 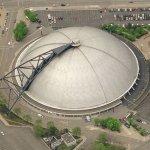 Naten53
@ 2005-10-19 16:05:45
The roof isn't opened that often and never for hockey games, but it works well. Built in 1961 of 2,950 tons of Pittsburgh steel, the arena features the largest retractable stainless steel roof in the world. The roof has no interior supports -- which means there are few obstructed-view seats in the Arena. The roof is 170,000 square feet and is designed to open or close in 2.5 minutes. The Igloo seats 17,537 for hockey and 18,500 for concerts. There are 56 skyboxes and 1,696 in-arena luxury seats. The arena also features the Igloo Club which can accommodate over 400 people for banquet functions. Located in the heart of Pittsburgh, the Civic Arena serves 2.7 million people in the Pennsylvania, Ohio, and West Virginia areas.