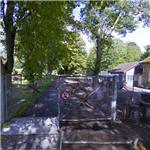 The site was so secret that even many politicians knew the exact position. Some were members of the Danish Communist Party so it was obviously a good idea to keep it secret. But secret was anyway up to it's closure and only a little has been told.